Nic Moon graduated with an MFA from RMIT University Melbourne in 2002 and a BFA Canterbury University 1990. Nic Moons work employs developments of the modern industrial age. Moon was awarded the 2007 Temporary Sculpture commission at Connells Bay and made six delicate shelter structures designed to protect and nurture native seedlings which referenced the regeneration of native bush currently being undertaken at Connells Bay. These structures, threaded with fishing net over stainless steel frames to reference Maori cloaks and Victorian hooped skirts, were adorned with fishing lures, seashells, shearing combs, sheep dog whistles, fleeces and bullets and acknowledged the people who had been before and their survival within the ecosystems of Connells Bay. 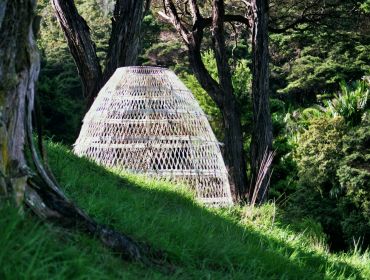